Call Us
Live Chat
Email Us
In Stock 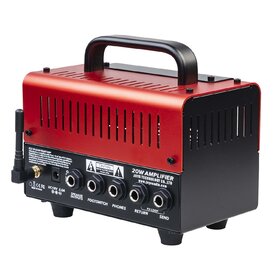 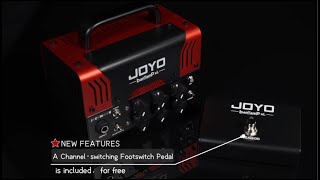 It’s been 2 years since JOYO launched the BanTamP series, and received amazingly positive feedback. Many clients take them along for performances by connecting them with JOYO 212/412 cabinets where the little head takes you by storm. Joyo has optimized the BanTamP series based on customers’ feedback, and now they’ve developed the brand new BanTamP XL series! Retaining the original tones and functions, BanTamP XL series features a channel switching footswitch 6 knobs - 2 channels' volume, tone, and gain can be controlled independently! Well, BanTamP XL series is definitely a better choice for musicians who love to perform with these amps!

The JaCkMan micro head blends valve and solid-state guitar amplifier technology, resulting in a tiny amp head that can produce an immense sound representative of a classic British amp. At only 163mm x 110mm x 140mm and weighing only 1.2kg the JaCkMan has to fill some giant shoes. It manages to fill them with ease with a mid-gain drive sound that reacts beautifully to your playing and guitar volume.

Just like the classic rock monster, the JaCkMan can really sing when you push it further. We recommend using a TS-type distortion pedal (like the Joyo Green Legend or Vintage Overdrive) to push it into higher-gain territory. This little terror has more rock in it than the whole of Blackpool. (Blackpool is a British Seaside resort famous for its 'rock' of the confectionary kind).

The JaCkMan has a 1 x 12AX7 Preamp tube - The ability to reproduce the true sound of your guitar was a key factor in assessing a tube for use with the JOYO BanTamP series. The 12AX7 pre amp tube produces the warm smooth overdrive tones that do not clip tone as a typical solid-state amp head would. The tube pre amp has the sonic focus of fattening tone stages and keeps your guitar sounding true to its original tone.

With 2 channels, flick the JaCkMan amp to the CLEAN channel and use with your array of guitar pedals. A two-channel amp makes a guitar head twice as versatile as alternatives and makes a great companion for musicians at practice or on the road. The JaCkMan will keep it clean and puts everything in place for the drive of your life.

The JaCkMan comes alive with its gain settings, you may want to use your favourite overdrive pedals to push it even further into higher gain territory with your own unique flavour. Push the drive and you will hear the JaCkMan scream. You may actually benefit from an additional Noise Gate to tame the beast! The FX loop on a guitar amplifier enables you to put your modulated based effects (Phasers, Flanger, tremolo and Chorus) after the JaCkMan delivers its drive magic. The FX loop keeps the modulated effects pure and will prevent them from becoming muddied from the amp gain.

Pair your Bluetooth device to the JaCkMan and jam along to your favourite classic rock tracks, connect your external device via Bluetooth and play your audio tracks cleanly through the amps Bluetooth receiver channel. We find that this is a great way to practice guitar and to learn new songs without a big tangle of wires.

The amp has a speaker out rated at 8 ohm and can also be operated at 16 ohm.

Careful, the amp is small, but 20 Watts is loud and will deliver a handful. If you want to practice quietly, use the built-in headphone out with speaker emulation, you get the same great tone as you would from a 150-watt mega amp.

Once you start working with this amp, you will soon forget its size. You will not forget the very affordable price and amazing tone it delivers. It will feel as if you are playing through a much bigger head amp and your audience just won't believe where your sound is really coming from.

Power: Connect with an 18v/2.5A power adapter as supplied.